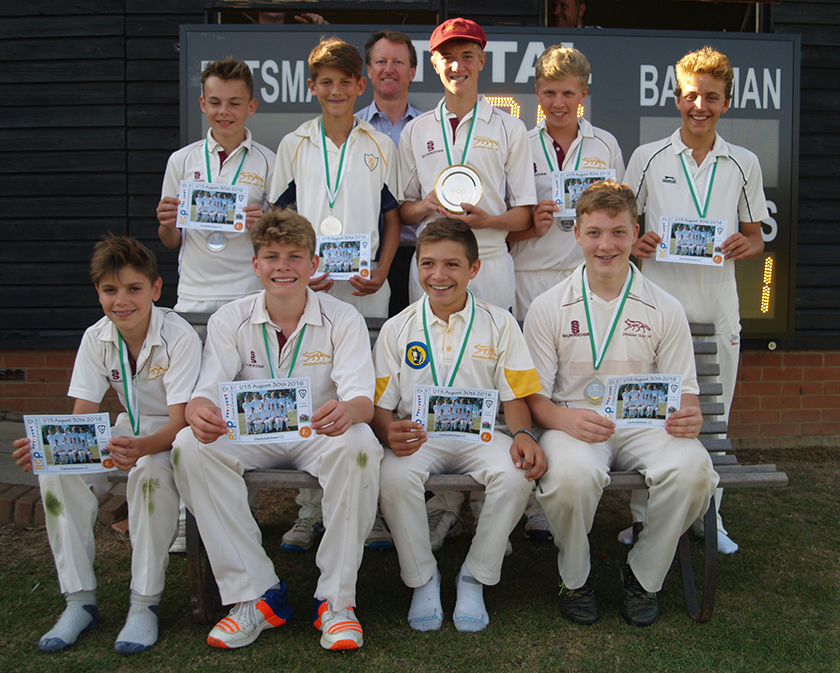 SNCL u15 Carnival Cup at The Langley Tuesday 30 August

Last week the u15s won the Norfolk Alliance Andy Seeley cup and today they added yet another trophy to their cabinet with victory in the SNCL u15 final. They’ve established themselves as one of Garboldisham CC’s best youth teams ever.

The South Norfolk Community League Carnival Cup is a brand new event that takes the top two teams from each of the two SNCL leagues and brings them together to play in a Finals Day – semis, a final and a 3rd/4th place play-off. Garboldisham u15s were drawn against Acle in the semi-final. Acle batted first and after an early batting collapse, recovered before being bowled out for 81 in the 13th over. There were two wickets apiece for Louis Hart and Toby Culling, and one each for Angus Russell, Harry Southgate and George Self, plus a run-out. Toby and George Southgate opened the batting for Garboldisham and they were soon finding the boundaries. A very fruitful ‘power-play’ over (all scores are doubled in the power-play) saw Garby pick up 34 runs from that one over alone and before they knew it, they’d chased down Acle’s total, to win the semi by 6 wickets. George finished on 43* and Toby finished on 35*. Norwich beat Rocklands in the other semi, and with lunch all done, the stage was set for the final…

Garboldisham batted first with George Southgate and captain Toby Culling again opening, and they made a slow but steady start as they tried to get the measure of the Norwich bowlers. On the first ball of the 5th over, Toby popped a simple catch to mid-off and was replaced by Arthur Johnson who was quickly off the mark with a well-timed shot to square leg. Spurred into action, George picked up a couple of boundaries and at the end of the 5th over the score stood at 31-1. Arthur slogged a tasty looking full-toss, only to be caught at mid-on to bring Louis Hart to the crease. Louis played a beautiful cover drive for 4 and then steered a nice shot through the gully for another 2 and at the half way point, Garby were on 75-2. Louis was beaten by a great ball in the 10th over and saw his stumps go flying. Some good initial running between the wickets from new batsman Finley Marshall and George Southgate, gave way to a run-out and Finley was replaced by Angus Russell who in turn was bowled and replaced by Harry Southgate. But with George Southgate still going strong at the other end, the runs kept adding up until George himself was bowled in the penultimate over – but not before he’d amassed a tasty 46 runs. A couple of very useful boundaries from David Thorne in the final over pushed Garby’s score along to 141-5.

Louis Hart opened the bowling for Garby and his third ball came off the batsman’s bat and hung in the air before being snaffled up by George Southgate at mid-off. This initial breakthrough was short lived as the Norwich batsmen took advantage of some short-pitched bowling that presented the ball on a plate to be hit away to the boundary – and at the end of the fourth over Norwich were ticking along sweetly at 39-1. Tighter overs from Arthur Johnson and George, together with Norwich’s danger man Harvey Lake being obliged to retire at 50, all helped ease the pressure despite Norwich gathering in 22 from their power-play over. After 8 overs the score stood at 74-1. Arthur took a very good high catch off the bowling of Harry Southgate, almost over the back of his head as the ball dropped out of the sun. Then in the next over, with the game still hanging in the balance, George Self showed great fielding skills as he stopped a well hit ball from going for four, just inside the boundary. At the end of the 13th over Norwich were on 116-2 and needing 26 to win off their three remaining overs – but crucially, they had a power-play in hand and so looked favourites to win. However, over 14 probably proved to be the turning point in Garby’s favour with George Southgate giving away just 2 runs and picking up 5 precious dot balls, one of which included a run-out taken by Finley Marshall off a buzzer. Norwich elected for the 15th to be their power-play over but good death-bowling from David Thorne kept their runs to a minimum, and going into the final over, the score stood at 130-5 with 12 needed off 6 balls. George Southgate bowled another cracking over with Norwich unable to find the boundary, and with just 4 runs added, Norwich ended on 134-5 and 8 runs short.

It was an excellent final between two very closely matched teams. Congratulations to Garboldisham u15s in their fantastic achievements this season!