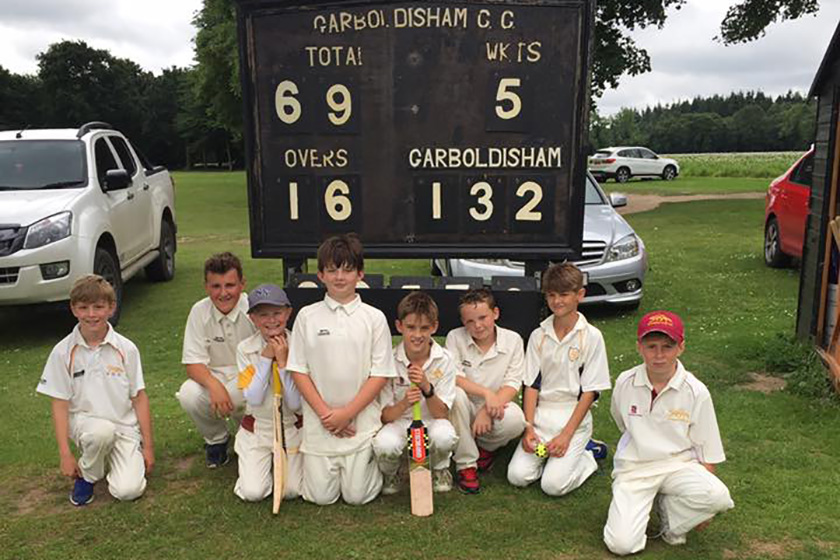 Sunday 10 July 2016: After last week’s loss to Old Buckenham, the U11s were back to their winning form against Hethersett and Tas Valley. This latest win takes them to the top of the South Norfolk Community League U11 Barnard League.

Captain James Davey won the toss and batted first on an excellent wicket prepared by Andy Smith considering all the bad weather we have had recently. Openers Elliot Hart and Jack Whitlam strolled to the crease looking to set the tone. Hart did just that, hitting the first ball of the match for 4 and scoring freely. Whitlam got a good ball first up and lost his off stump, but Hart continued in his boisterous fashion and after just 3 overs with the score on 39/1 Hart had to retire after reaching his quota of 30 not out. After this the run rate slowed down a little but all the Garby team added useful contributions – Charie Aldous 7, James Davey 14, Daniel Worby 10, Ronnie Stevenson 6 not out and Oscar Skilleter, a very patient and well constructed 19 not out. Oscar has impressed throughout the season with the bat, very solid in defence and punishing the bad ball with some excellent running between the wickets. Garby finised on a strong 132-4 from their 16 overs.

The young Foxes took to the field in high spirits and confident of defending their total, and when Hart knocked Tas’s key batsman Will Warley’s off-stump over in the second over with the score on 4, the youngsters smelt blood. All bowlers bowled well, probably their best bowling performance off the season. Dylan Starling was the next to strike when he removed the dangerous Joe Thorndyke for 14, and then Daniel Worby came on and took 2 wickets in 2 balls, and came within a whisker of a hat-trick, but the umpire (Dad) turned down his very close LBW appeal. Oscar Skilleter kept wicket for the first time this season and did a good job throughout the innings, stopping some very quick deliveries from Whitlam and Hart. Whitlam came back into the attack and picked up a well deserved wicket at the end and Tas finally finished up on 69-5 with Garby winning comprehensively by 63 runs to return to the top of the table. With 3 matches left, there is all to play for at the top. Only 6 wides and 2 no balls were bowled in the 16 overs by Garby which is a fantastic effort.

A brilliant all round performance from all the players, a joy to watch, manage and umpire.