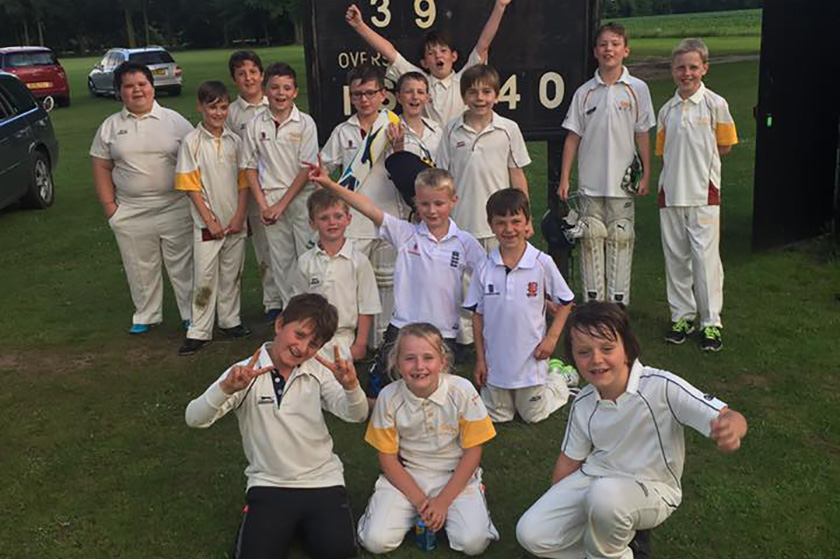 Due to all the call-offs for bad weather and the opposition not being able to field a team, the U9s have only managed to get one game in all season, so an inter-club friendly was organised to give the young boys (and girl) some much needed ‘match practice’. 16 youngsters turned out on an overcast evening at The Langley, the majority U9 but a few U11 to make the teams up to 8-a-side and they all did battle in a 16-over-a-side pairs match. The group were split into 2 fair teams and the nominated captains Jago Bucher and Rudi Howard walked to the middle for the all important toss, and when Jago called wrong, Rudi had no hesitation in bowling first.

Many of the inexperienced youngsters were taking part in their first cricket match. U11 newcomer to the club Ewan Edge, opened the bowling against U11 Dylan Starling and bowled well without luck in his first spell. Dylan and Elliot Wynn put on 20 for the loss of 1 wicket in their 4 overs with Logan Farmer picking up the wicket. Jago and Oli Lambert batted solidly without troubling the scorers too much and at the half way point (8 overs) Jago’s team were struggling a little at 24-3. Young Ryan Woodrow on his 8th birthday then came to the crease with Oscar Harris and scored freely, adding 19 runs to the total for the loss of 1 wicket and after 12 overs Jago’s team were 43-4. Last pair, the brother combination of Ethan and Oscar Harris
(Oscar batting again as a child had to go home early) also batted well adding 17 runs for the loss of 1 wicket which meant Jago’s team finished on 60-5, and with 4 runs taken off for each wicket they scored a total of 40.

Wickets were shared between:
2 for Ewan Edge
1 for Logan Farmer
1 for Rudi Howard and
1 for Ronnie Stevenson.

First pair to bat were Logan and Rudi. They struggled a bit with the good bowling from Lambert, Woodrow and Elliott Wynn and after their 4 overs found themselves 7-2 and behind the required run rate. Next pair of Libby Worby and Ronnie Stevenson picked the scoring rate up and after their 4 overs the score had moved on to 24-3, (net score 12) but work still needed to done with the final 2 pairs if they were going to get near their target. The third pair of Johnny Wynn and Ewan Edge did just that and scored 22 runs for the loss of no wickets and they pushed the score on to 43-3 (net 29). Ewan looking particularly impressive including hitting a lovely leg-side boundary. So the last pair of Albert Ballard and Jack Hendrie strolled to the crease needing a net score of 12 from there 4 overs to win the game. The first over bowled by Jago yielded 3 and kept them on course for victory, but the next over bowled by Oliver Lambert didn’t go to plan, 4 runs scored off it but Oli took 2 wickets, and with 2 overs to go Rudi’s team were 50-5 (net 30) and needed 11 to win. The 15th over bowled by Ethan Harris yielded 9 runs for 1 wicket and left Rudi’s team 59-6 and needing 6 from the last over to win… The Langley crowd were feeling the tension in the air and there was silence as Ryan Woodrow came up to bowl the last over… Ball 1 was a dot ball with no runs scored, ball 2 and Albert scored a single, so 5 was required from 4. Ball 3 and Jack Hendrie hit the ball to square leg and as substitute fielder James Davey threw the ball for a run out, it missed the stumps and went for 2 overthrows and 3 runs were scored… 2 runs were needed from the last 3 balls: ball 4 was another dot ball (well bowled by Ryan), ball 5 and disaster struck for the batting side – as the batsman tried to sneak a quick single, James Davey made a direct hit run-out and with 4 runs deducted from the score the batting team needed 6 from the last ball. Jack Hendrie smashed it for 4 but it wasn’t quite enough and Jago’s team won by 1 run!

A thrilling ‘Friendly Match’ and experience for the youngsters. A good night enjoyed by all. Well done to all involved!