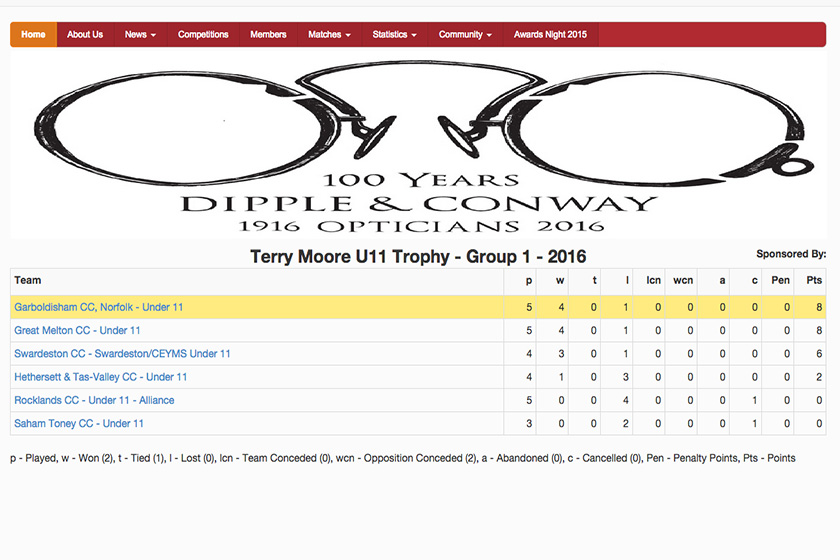 Garby under 11s demolish unbeaten Swardeston in their own back yard!

Garby travelled to unbeaten Swardeston knowing they would have to play their ‘A-game’ to get a result. Winning the toss James Davey elected to field first. Swardeston got off to a steady start with their opening pair scoring 21 from their 4 overs for no wicket. Their second pair, with hard hitting Luca, scored freely but Oscar Skilleter got a vital wicket with a good caught and bowled and then the ever impressive Jack Whitlam took a second wicket in the next over when he bowled his school mate Luca with an unplayable in-swinging yorker. The second pair finished with 33-2 from their 4 overs. After this the Garby bowlers were all over the opposition – Elliot Harte got 2 wickets, both bowled in quick succession with an impressive variation of pace and spin bowling, and Jess Davey got 2 good run-outs. Swardeston eventually struggled to a below par 94-6 from their 16 overs.

Garby were happy with this total and chasing a net score of 59 to win they knew that if they batted well, like they can, it would be a very achievable target. Openers Elliot Harte and Beth Champion batted superbly, especially Elliot who smashed the ball to all parts from ball one. Beth also hit a sublime pull shot for 4, They added a very impressive 43 from their 4 overs for no wicket, Elliot hitting a very good 26! Jess and Daniel Worby then came in and batted sensibly scoring 20 from their 4 overs for the loss of 1 wicket. Jack Whitlam and James Davey then scored freely with some big shots and clocked up 36-3 from their 4 overs which meant that when the final pair of Charlie Aldous and Oscar Skilleter came in, Garby were at 297-4 with a net score of 275, putting them 17 runs ahead. The final pair batted well, defending good balls and hitting any loose bowling, and aided by some wayward wides by Swardeston’s bowlers, they finished up scoring 19-2. This was enough to give the youngsters a 22 run victory to put them joint top of the league which guarantees a top two finish and takes them through to the quarter-final knockout stages.

The young Foxes keep impressing and are a joy to coach. Well done to all!