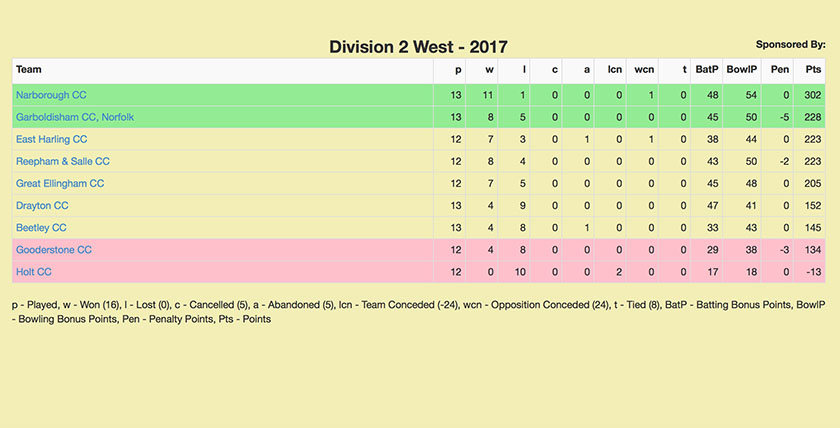 On a rain affected day, there were wins for Garboldisham 2s and 3s but another loss for the 1s. Here’s a summary of the day’s play

The 1sts were away at Downham Market. Garboldisham lost the toss and were put into bat and once again struggled to get runs on the board with only opener Dan Constable (48) and wicket keeper Pascal Walker (33) picking up plenty of runs. Garby found themselves bowled out in the 36th over for 166. In reply Downham were 167-3 with Alex Hogg taking two wickets and there was a run-out from Henry Phoenix. The 1sts remain in third from bottom place in the Premier Division and just out of the relegation zone above Fakenham and Sprowston who both lost their matches.

The 2nds were at home and facing bottom of the table Mundford. The game was reduced to 30 overs per side to account for the rain and Garby were put in to bat and, with all of the top and middle order firing, the 2nds wrapped up their innings on a very healthy 267-5. Danny Philpott finished on 78 not out and Jack Stevenson picked up 45. Mundford batted bravely but in vain, to chase down Garby’s total and they finished 99 runs short on 168-6. This win leaves the 2nds still sitting comfortably at the top of the Norfolk Alliance Division 4

The 3rds travelled to Gooderstone who won the toss and put Garboldisham in to bat. With each innings reduced to 30 overs, Garby scored 148-8. In reply, the home side were bowled out in the 28th over for just 90 runs to give Garboldisham a 58 run victory which nudges them into second place in their league and in with a chance of promotion.
(No individual player details available on play-cricket scorecard)

There was no game this week for the 4ths