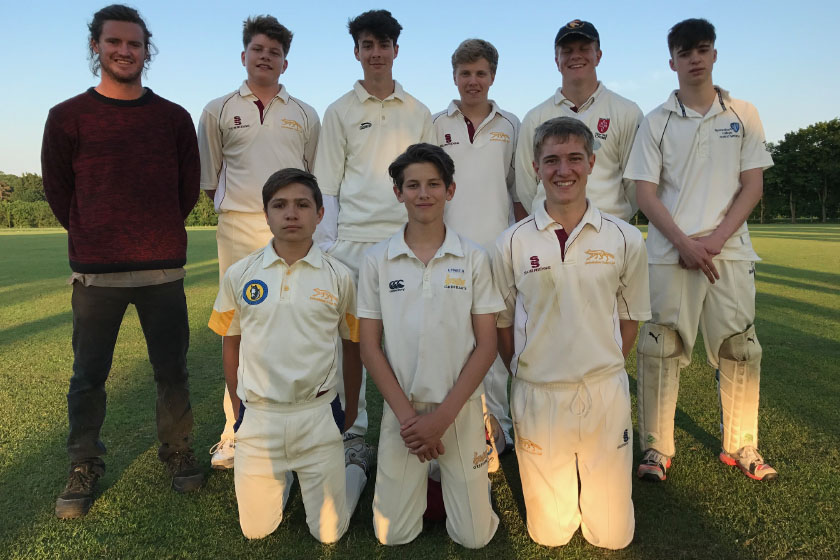 On a beautiful summer’s evening at The Langley, the unbeaten under 15s side of last year came together again for their first u17 match vs Mattishall.

After picking names out of a hat captain Toby found his steady scoring self, last in the batting order. Oli Cambelle and Finlay Penrose opened and got Garb off to a flyer!

8 overs in, Oli was hitting boundaries for fun to help his team to 70 for 1. The fall of Joe Baker brought “Game changer” Arthur Johnson to the crease. The little man hit some big shots including a massive 6 to the club house where he was caught by coach Jack Stevenson. Arthur went on to demolish the Mattishall attack until being bowled for 27 off just 14 balls! Not bad for a Sunday league player…

Next in was George Southgate who had clearly been watching the IPL and played an outrageous ramp first ball! The disrespect continued as he reverse swept Mattishall’s mean fast bowler. If that wasn’t enough George took Mattishall to the cleaners and hit a square six high into the trees to take Garb’s total to 162 for 3. But really, the stand out performer was Oli Cambelle who finished on 78. The Mattishall bowlers came off the pitch both fuming and in awe at Garboldisham’s masterclass.

However, defending this total was going to be harder than expected for the youthful players who may have been slightly overconfident. Some class batting from Mattishall’s opener, B Chapman, kept them in the game. However after a few tidy overs from Lewis Hart, and Finlay Penrose taking the key wicket of Chapman, there was no coming back for Mattishall despite a valiant effort from the rest of their team. Angus Russell topped it all off with his overs going for just 13.

Overall a great performance and a very entertaining game. Thanks very much to the Dan the Aussie for umpiring and Ross Johnson for scoring.