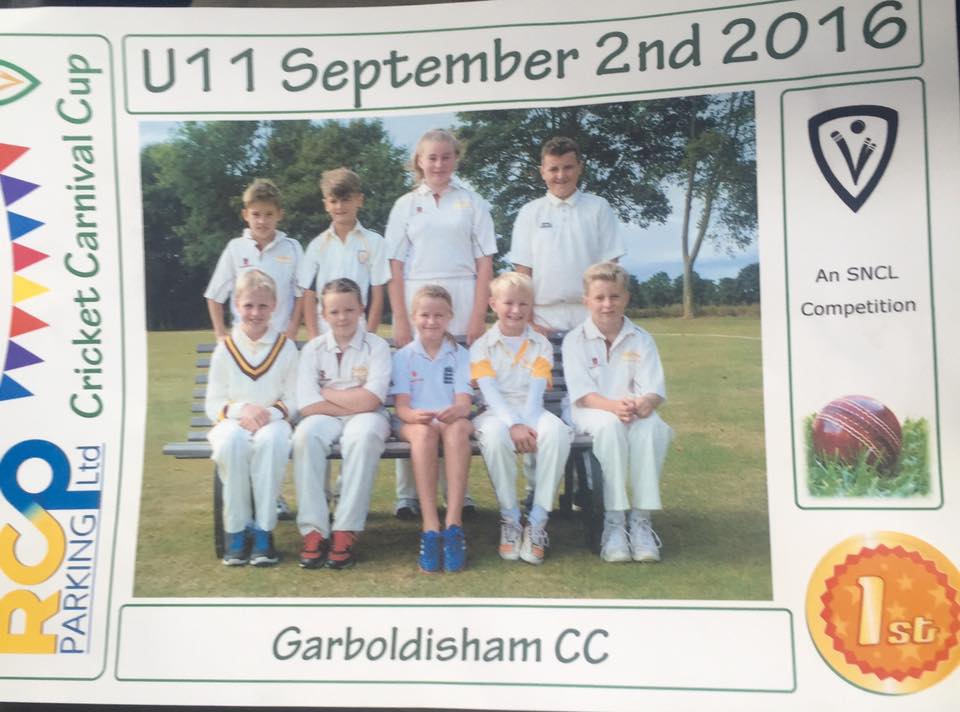 After winning their league, the U11s were invited to take part in the South Norfolk Community  ‘Carnival of Cricket’ at Garboldisham along with Hethersett, Topcroft & Mattishall.

The format for the matches was 16 overs per side, no bowler could have more than 3 overs, batsman retire at 30 and cannot return, last man stands and 2 power play overs where runs and extras count double.

In their semi final, Garby played Mattishall, runners up in their league. James Davey won the toss and elected to field. However the early break through did not come as Stoltz and Lake put together a useful partnership of 63 before Lake (8) was run out and Stoltz retired for 30 after 8 overs. From here the Garby bowlers turned the game round and were backed by the fielders. The next 8 overs only went for 31 runs as James Davey, Jess Davey & Ethan Harris took a wicket apiece plus another run out as the innings closed on 91.

Elliot Harte gave Garby a solid start hitting 13 off the first over but was soon bowled for 15. Aldous was run out for 1 with Garby on 19-2. The next wicket was the winning partnership. Oscar Skilleter joined Jack Whitlam and both started rotating the strike with boundaries coming to both batsmen. Mattishall decided to bowl their players to try and break the partnership but the Garby batsmen stood firm. Whitlam was caught for 26 and Skilleter was bowled for 25, but the partnership was worth 52. James Davey 9* saw Garby over the line in the 15th over.

Topcroft had beaten Heathersett by 6 wickets in their semi final.

Therefore Garby had to play Topcroft in the final. This time Garby batted first on winning the toss and Harte began brightly before a disputed stumping saw his dismissal for 9. Like in the first match, the second wicket partnership brought 45 runs by Whitlam (29) and Charlie Aldous (21). Emms accounted for both their wickets but the scoring rate continued as Skilleter 14* and James Davey (8) saw the Garby total reach 103 off their 16 overs.

Garby knew that early wickets were key and first Whitlam, then Harte, duly obliged as Pywell (1) and White (0) were bowled. Emms proved to be the best remaining batsman as he reached 28 before he was run out for 28. After 10 overs Topcroft were 47-3 with their three best batsmen back in the pavilion. Charlie Aldous (2-6) and Daniel Worby (1-15) bowled well to keep Topcroft at bay and a further two run outs saw Topcroft all out for 82 and Garby victorious by 21 runs.

Mattishall beat Hethersett in the 3rd/4th play off match.