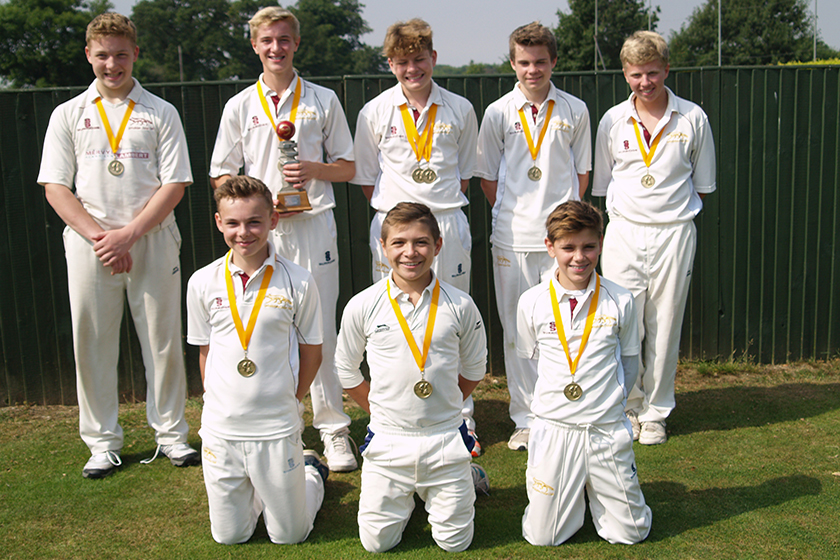 Garboldisham CC u15s beat Horsford CC in the final of the Andy Seeley Trophy by 10 runs and made club history by becoming the first Garby youth team to win a Norfolk Alliance competition. In 2011 and 2013 GCC u17s had won the Junior Carter Cup but GCC youth had never got their hands on a Norfolk Alliance League trophy – until today! Well done to captain Toby Culling and all the u15 lads who played in all the matches. This win is the culmination of a fantastic summer for the u15s which started back on the 2 May with their first league game. There are four u15 leagues in the Norfolk Alliance that brings together 27 teams from across the county and Garboldisham went on to top their league, Group 1, by the end of June and thus qualify as one of eight teams that go forward to play in the knockout stages. After 1/4 final and semi-final wins against Bungay and Dersingham, Garby were up against Horsford in the final.

After a one minute silence for Andy Seeley (pictured above), who had sadly died earlier this year, the final was underway with Garboldisham batting first. Toby Culling and George Southgate got the game off to a cracking start with boundaries galore and the scoreboard was 70-0 at the 8-over halfway stage – but both had to retire on 30 as per the rules. With two new batsmen, Arthur Johnson and Finley Marshall at the crease, the runs dried up until Arthur cracked away a much needed boundary to long-on. Garby struggled to pierce the gaps in the field but ones and twos kept the scoreboard ticking over. Finley was bowled for 18 and was replaced by Max Elders. Excellent bowling from the Horsford pace and spin combo in the final few overs restricted Garboldisham to 113-1 off their 16 overs. Would it be enough runs on the board?

Toby and George opened the bowling and George hit the mark straight away with his first ball that sent the Horsford stumps flying! It was just the start that Garby needed. Unperturbed Horsford continued to gather in runs until a mix-up brought about a well-taken run-out by Garboldisham’s keeper Finley Marshall in the 5th over. Two overs later Angus Russell removed a third Horsford batsman with the first ball of his first over! Garby’s tails were up and a super maiden over from Arthur Johnson tightened the screws and Horsford were on 44-3 at the end of the 8th over. It felt that the game had suddenly swung in Garboldisham’s favour but Horsford continued to add runs to the scoreboard. In over 13 Arthur whipped in a terrific ball from the outfield that took out the stumps for a run-out and a fourth Horsford wicket. Garby had the game in the bag and even with some loose bowling in the final over, Horsford were just too far behind and they finished 10 runs short on 101-4.

Andy Seeley’s widow presented the trophy to Toby Culling (pictured below) and George Southgate was awarded man-of-the-match for his all-round performance.

Congratulations to all the u15 players that took part in the competition. A fantastic achievement! However, the u15 season hasn’t finished yet – on Tuesday next week they take part in the SNCL finals day which will be held at The Langley with semis in the morning and the final in the afternoon.

Thank you to u15 manager Dick Culling and to Dawn Briggs for scoring.