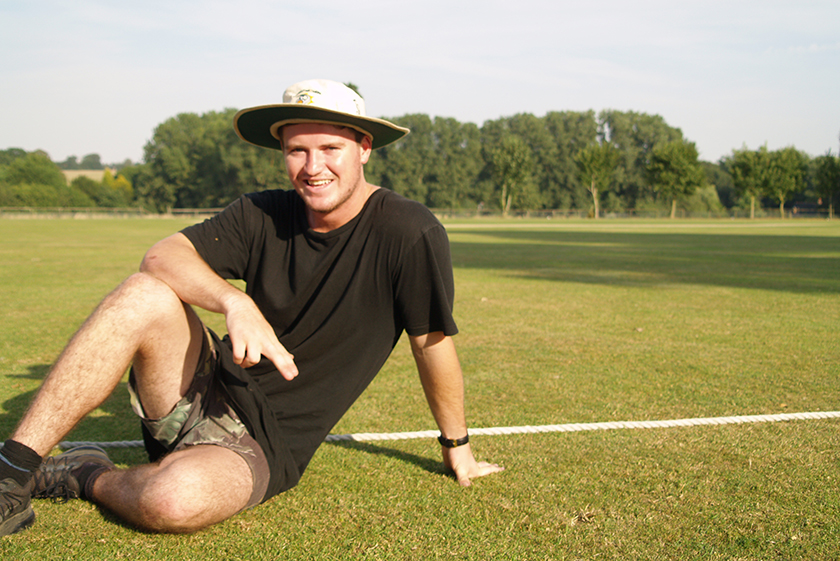 Dan Constable has been feeling right at home. It’s the hottest day of the summer and the weather reminds him of being back in Australia. But it wasn’t always like this – when Dan arrived at GCC back in the spring it was just 4° – what had he let himself in for?!

Dan left his home town of Wollangong, which is about an hour’s drive south of Sydney, in April to join GCC as our overseas player and junior coach. Last year he’d been studying Business Studies at University but he hadn’t enjoyed it and so had decided to defer it for a year and do some travelling. Time out playing as an overseas player in an English cricket league seemed like the perfect opportunity and he took up Garby’s offer of a position.

Dan first started playing cricket 10 years ago as a 9-year old, and his hero and inspiration growing up had been the former Aussie captain Michael Clarke. As Dan’s cricketing skills improved, he was picked up by Campbelltown Ghosts – one of Sydney’s leading club teams (Monty Panesar has jus signed up with The Ghosts for their 2016-17 season). Dan came to Garby principally as a batsmen but he’d be the first to admit that, early in our season, he struggled to get runs and it was as a part time off-spinner that he had more success. Club captain Danny Cash observed that:

“Dan was a little apprehensive about what he was letting himself in for, for the summer. After a few net sessions we could tell he was a decent cricketer but it took time before we saw the best of him. A mixture of nerves, inexperience of conditions and the pressure of seeing other overseas players dominate games and get rave reviews seemed to be added pressure put on him. We were winning games however, so I hadn’t the same thoughts. As the season moved towards the halfway point I saw a change in Dan, he’d become a lot more comfortable in his new surroundings and his first league 50 against North Runcton really settled him.”

Dan quickly found GCC players and members very welcoming and easy to get along with, and he describes Garby as a very friendly, relaxed club with a camaraderie that he hadn’t always found back in Australia. Had he enjoyed his time at Garboldisham? “Loved it!” was his immediate reply. A key moment for Dan, and his best memory of his time in the UK was, without doubt, the club tour to Northampton – which he summed up as “carnage!”. Danny Cash picks up the story:

“We took him on tour and that’s where he really came out of his shell. The chance to mingle and spend time with so many club members at once in a relaxed environment, in my opinion, made a huge difference in Dan and you could see a massive change in his character. His new found confidence and more relaxed demeanour off the field made a huge difference on it and his stats for the second half of the season are very good.”

Dan has gone on to score five half centuries for Garboldisham and help the 1st team rise to 2nd place in the Norfolk Alliance Premiership (as of w/b 22.8) in only their first season in the top flight! Off the field, Dan has been popular amongst the youngsters with his coaching on Friday evenings and at local schools and he has also entertained the club on a few occasions after games with his guitar, with many onlookers giving rave reviews!

Dan heads back to Australia on 11 September to start a journalism course at uni’ and to play more cricket – this time for the Western Suburbs CC of Sydney – a club that was founded in 1895 and is the home club of Dan’s hero Michael Clarke. It’s been a great summer for Dan and for the club and GCC will be sad to see Dan depart. As Danny cash said:

“Dan has been a great addition to the club. He’s exactly what we wanted from our overseas player and I believe we got it right by getting him over. He’s a cracking lad, talented musician and a very good cricketer and should he decide to come back over next year, I for one would be more than happy for him to don the baggy burgundy again”

Our chat with Dan was coming to an end – he had work to do. First he had to re-drape the barrels of bitter for the weekend’s beer festival, with damp towels to keep them cool in the late August heat, and then he was off to umpire an u17s game. But before he left we asked him for some key coaching tips for any young cricketer who is keen to do well:

Batting. When you are starting out, don’t worry if you can’t hit the ball very far or very hard. Concentrate on your technique instead.

Bowling. If you’re a fast bowler, don’t sacrifice accuracy for speed. If you’re a spin bowler, concentrate on hitting the same spot again and again and bowl dot balls to build up pressue on the batsman.

Fielding. Enjoy it! Run around, back-up, get involved and be switched-on.

Thank you and best wishes to Dan in the future from all at Garboldisham Cricket Club.