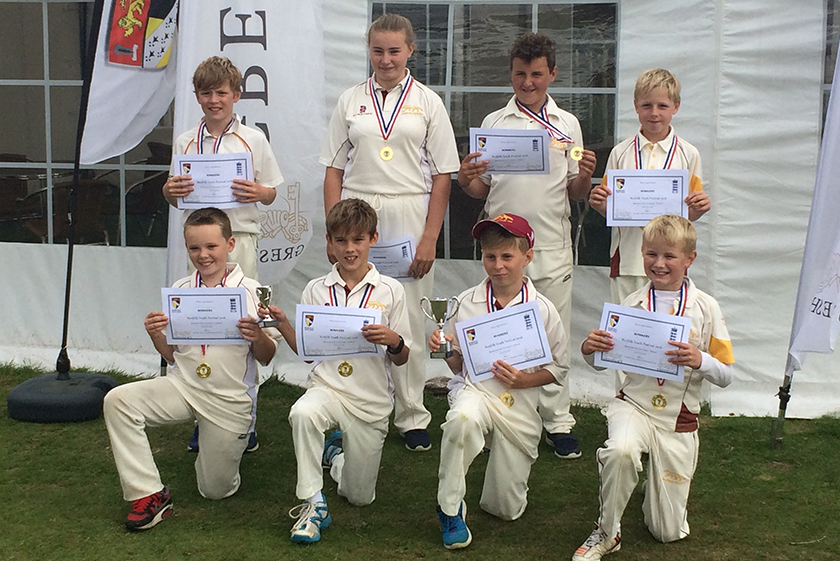 Played at Manor Park, Horsford, the home of Norfolk cricket, the Norfolk County Cricket Board have this week put on a festival of youth cricket which started with the U11s hard ball competition on Monday which Garby came out of as winners!

There were two groups of three teams – Garboldisham were in group two with Horsford and Great Melton – with matches consisting of 8 overs where everyone (excluding the wicket keeper) had to bowl an over each with one other bowling two. Batting was in pairs for two overs each, with each team starting on 200 but losing 4 runs for every wicket lost.

Garby’s first game was against the hosts, Horsford. Having lost the toss, Garby were asked to bat first. All players contributed with Charlie Aldous hitting 11* for the loss of one wicket in a total of 245-1 (net score 241). Horsford’s batting was not as good as their bowling until the last over where Horsford were 239-1 after Aldous had taken the only wicket. Whitlam bowled a good line but two lusty hits from the Horsford captain including a boundary off the last ball saw Horsford finish the game on 247-1 (net score 243) which meant Garby lost the game by 2 runs. The team had played so well and came so close so had to pick themselves up for the next game against Gt Melton.

Gt Melton then beat Horsford comfortably meaning Garby had to be at their best to overcome Melton which they did.

Garboldisham won the toss and elected to field. Runs were at a premium for Melton as Garby bowlers stuck to their task. Daniel Worby took two wickets and then dropped a catch which would have seen a hat trick but a wicket for Whitlam and run out from Skilleter saw Melton finish on 237-4 (net score 221). Garby knew they had a good chance but lost two early wickets. Jess Davey 11* and Charlie Aldous 10* contributed to the Garboldisham total and with the loss of one further wicket, Garby finished on 249-3 (net score 237) to win the game.

This meant all teams had won one match each and the group was settled on gross runs. Gt Melton came first with 502, Garboldisham second 494 and Horsford third 493. Group one also finished with each team winning a match each. Burwell came out on top but as Stow and Acke had a lesser gross run score, Garby progressed to the winners group for the afternoon matches.

Same format but 5 ball overs due to time. Garboldisham played Burwell first and had a thumping win. Batting first all Garby players contributed to the score as they reached 252-2 (net score 244) in their allotted overs with extras the main contributor of 31! Burwell were never in the hunt as Jess Davey took a wicket with the first ball of the innings. 2 wickets for Whitlam, 1 each for Worby and Aldous plus a run out saw Burwell end their innings 227-6 (net score 203). An excellent all round team performance.

Garboldisham then played Gt Melton knowing that a win would take the title, and the team put in a magnificent performance. James Davey called correctly and elected to bowl and kept Whitlam back which proved to be a good decision as Jess Davey, Ethan Harris, James Davey & Dylan Starling bowled accurately. Jack Whitlam took the only wicket in his two overs for four runs with excellent support from Daniel Worby and Charlie Aldous, as Gt Melton ended their innings on 235-1 (net score 231).

Garby kept the batting pairs and order the same in each game and this worked well again as Jack Whitlam 10* got Garby off to a great start. James Davey also played a captain’s innings with 11 as all players contributed to the total. Sensible batting from the final pair of Aldous and Oscar Skilleter ensured no further wickets fell as Garby finished on 244-1 (net score 240) to become champions.

A fantastic performance by the team especially after losing their first match and narrowly progressing by the thinnest of margins. Jack Whitlam was also named bowler of the day so the day ended on a higher note for him and Garboldisham cricket club.