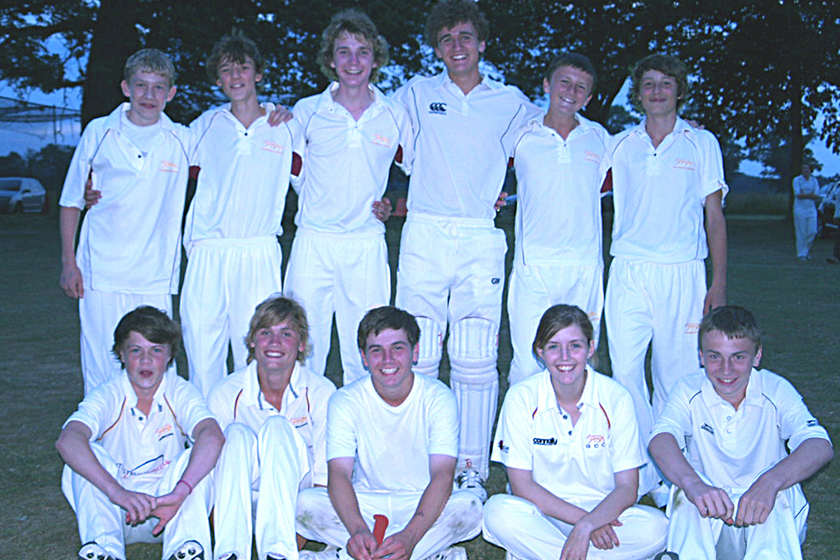 Photo from the archives: Tuesday 20 July 2010. The u15s beat Vauxhall Mallards in the semi final of The Andy Seeley Trophy.

Tomorrow evening (Monday 8 August), captain Toby Culling will lead the u15s out at The Langley in the semi-final of the Norfolk Alliance Andy Seeley Trophy against Horsford. The u15s progressed to the semis after winning their NA group league and then beating Bungay in the 1/4 final two weeks ago. Please come along and help support the lads in this fantastic Norfolk wide competition.

Six years ago in 2010, GCC u15s captain Ben Asker led the team out to face Vauxhall Mallards in the semi-final of the same competition. It was a thrilling match and we’ve dug out the match report and reproduced it in full here:

In fading light Harry Youngson smashed the ball for 6 off the penultimate ball of the innings to clinch a historic victory for Garboldisham U15s against Vauxhall Mallards in this thrilling semi final of the Andy Seeley Norfolk Alliance Trophy. Garboldisham will meet either Lowestoft or Sprowston in the final on August 18.

Mallards won the toss, batted first and were soon finding boundaries but a change of bowling brought on Joe Paul who took the first Mallard wicket as C White edged to Garby keeper Joe Seaman. And in the next over, the second Mallards wicket fell as Harry Youngson dropped in a shorter pitched ball that ballooned off the bat of Matt Plater for a simple catch to Philip Carr at square leg. Unperturbed, Mallards pushed on and their score continued to rise at a healthy rate until Carr thrust his arms skywards to snatch a second, dramatic catch off the bowling of Sarah McGahan and send Harry Barker back to the pavilion for 23. Mallard’s Rupert King scored a tasty 51 before being run out and S Campbell added in a useful 21. Bung in a few too many extras from Garboldisham and Vauxhall Mallards finished on a heady 173 for 5 which would be a tough one for Garboldisham to chase down.

Garby lost the early wicket of Matt Allin but Henry Phoenix and Ben Asker soon looked comfortable and started to build the innings, picking up lots of quick singles, and they were soon up with the run rate. There was an intense hush across the ground – it was ‘game-on’ and the audience were watching what would be a dramatic final quarter unfold. As Asker and Phoenix grew in confidence, so the boundaries started to come and the Mallards fielding became tense and nervy with overthrows and dropped catches. Garboldisham were right on the run rate and the Asker/Phoenix partnership looked unbreakable as they clocked up their successive half centuries. With the finish line in his sights, Henry Phoenix chipped two effortless sixes, one after the other over the square leg boundary and the audience hush turned into a roar of appreciation.

The game was all but won but then S. Campbell took two successive wickets in the 18th over and the Asker/Phoenix partnership was snuffed out in an instance and the game was turned completely on its head. Enter Harry Youngson and Joe Paul. Paul survived just one ball before M Plater sent his stumps flying and he was replaced by Joe Seaman in the 19th. Runs had dried up and Garboldisham needed 13 off the final over to secure victory. The sun had dropped from the sky and in the fading light Youngson took strike, picked out the ball and swiped it for six over cow-corner to throw Garboldisham a lifeline. A couple of singles and a double off the next 3 balls meant that Garboldisham needed 3 off the last 2 balls. Harry Youngson stepped up to the mark and wrapped up the game in style with a second six that flew towards the pavilion sending the appreciative home audience scattering and yelping with delight.

This was a terrific win for Garboldisham U15s against a very strong Vauxhall Mallards side.