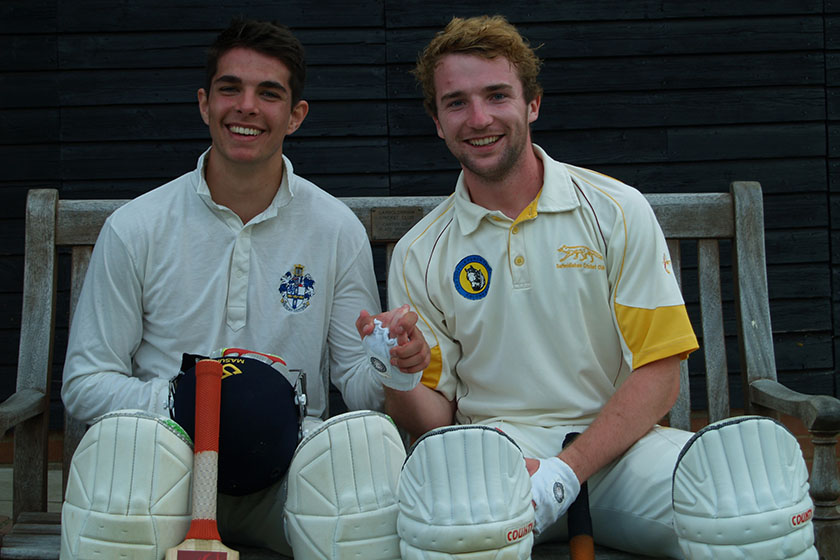 Kieran Pask (80*) and Henry Phoenix (57*) (pictured above) helped the 1sts to an 8 wicket win over visitors Dereham. Earlier in the day, Pask had taken 5 wickets as Dereham were bowled out for 184. This win gives the 1sts 23 points and with both Lowestoft and North Runcton (Garby’s nearest rivals in the league) losing out to their opponents, Garboldisham now have a 31 point lead at the top of their league over second placed Runcton (although Runcton still have a game in hand).

Dereham batted first, but with excellent tight bowling from Pask and Alex Hogg, Dereham were 2 wickets down at the 10 over stage and only had 15 runs on the board. Gavin Barnes and Jack Buckmaster carried on the good work with the ball and Buckmaster took the breakthrough wicket of Dereham’s number 5 batsman to upset what was looking like a rock solid partnership, and from thereon, Dereham continued to lose wickets at regular intervals as they pressed on to up their score. Rob Fuller took their final wicket in the last over and they were 184 all out. A mention must go Dereham’s captain and opening batsman who fought hard to finish on 99 not out.

Kristian Williman and Danny Cash opened the batting for Garby. Cash was looking good and hit a quick fire 13 runs before misjudging a ball and seeing his stumps tumble and he was replaced by Henry Phoenix. Williman and Phoenix were ticking along very nicely until Kristian advanced down the wicket to attack a slower looping delivery only to be stumped as he swung and missed and he was out for 20. In came big-hitting Kieran Pask who cracked away the second ball he faced for a massive six and it was time for spectators to be on their guard and to think about whether they should move their car or not. The Pask/Phoenix partnership proved to be a good one with Henry batting with his usual great maturity and steady head, and Kieran picking off the poor balls to dispatch them with ease to the boundary. They had the game wrapped up in the 30th over and Kieran finished on 80* off 41 balls, including 6 sixes and Henry finished on 57*.

The 2nds were away to Rocklands, batted first and posted 222 for 7 which Rocklands chased down to win by 5 wickets on 223 for 5.

The 3rds had a troubled day at Drayton. The hosts batted first and scored 255 for 7 but in the chase, Garboldisham collapsed and found themselves bowled out for 110.

Back at The Langley, the 4ths were involved in a high scoring game against the visitors Ketteringham Hall A who posted 278. Destructive batting from Eddie Thorne (99) who just missed out on his ton and Johnny Wyatt (133*) saw Garby overtake Ketteringham’s total in 33 overs. A tasty 26 points from the match might just help the 4ths in their battle against relegation.