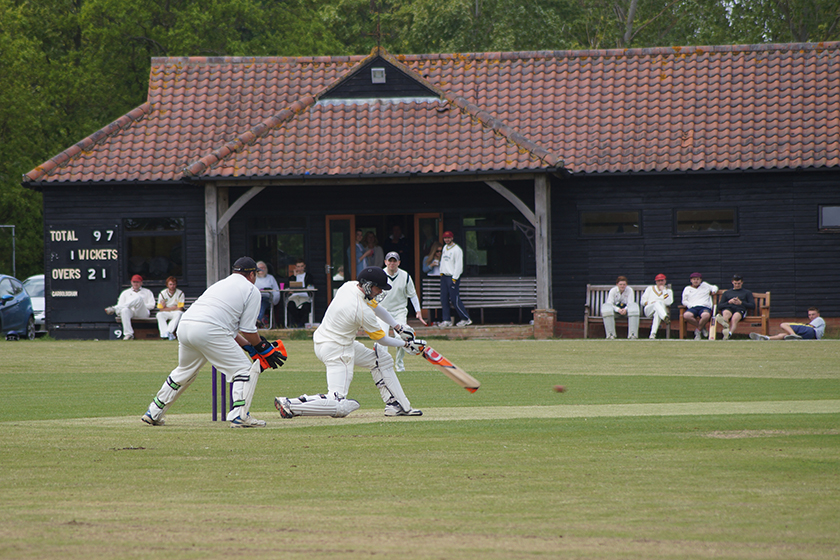 The 1st team hosted Mattishall at home and picked up a maximum 25 points to push them up to the middle of the league table in Division 1 of the Dipple & Conway Norfolk Cricket Alliance. Batting first, Garboldisham scored 248 for 5 wickets with Kristian Williman clocking up a century and finishing on 121 runs! In reply, Mattishall struggled to squeeze out 88 runs before being bowled out. Pick of the Garby bowlers was Andy Emms who took five wickets. It was a very satisfying day for the Firsts who are slowly getting back to full strength with the return of lads from uni’ and it was good to see Henry Phoenix and Harry Youngson back on the field. Well done to all – a great win!

It was another disappointing day for Andy Freake and the 2nds who have still to get a win under their belts. Playing away at Winterton, the hosts batted first and were 77 without loss after 14 overs but then good bowling from old stagers Paul Fevs and Charlie Wright saw 6 wickets fall for 69 runs. Philip Carr wrapped up the tail with 4 for 34 and Winterton finished on 183 all out. Unfortunately Garboldisham’s batting did not live up to what was expected and they were found wanting. It was only rearguard batting from Rowan Freake (25) and Adam Pringle that brought some sort of respectability to the score but still leaving Garby 62 runs short on 122.

The 3rds had a great day’s outing up in Costessey winning by 73 runs and gathering up 25 points. Batting first they scored 166. Costessey struggled to get close and were bowled out for 93.

The 4ths are still facing problems with a shortage of players and consequently they had to put out a very young team against visitors Rocklands. But it was good experience for the youngsters. The game finished with Garboldisham all out for 97 and Rocklands on 101 for 6. A minute’s silence was held before the start of the game in memory of Ian Melvin. Photos are shown below.