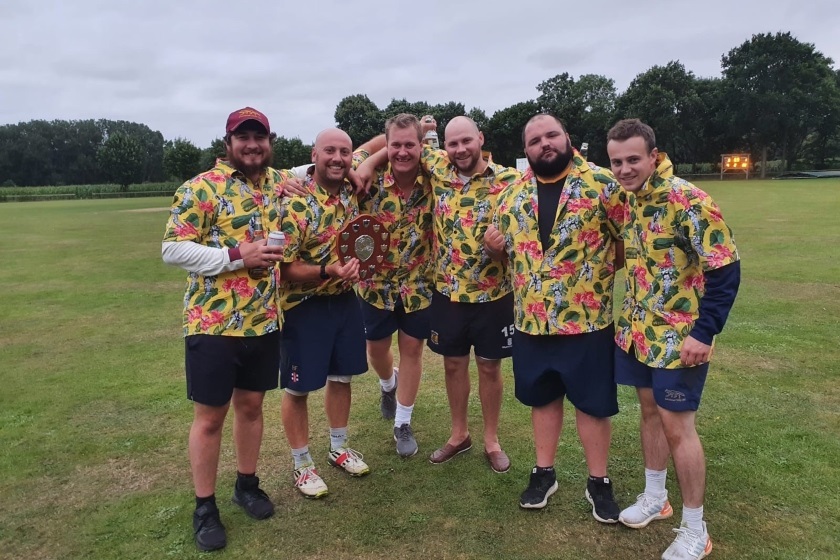 With the cricket season over with for another year it’s time for a brief look over how each team did for the season and the highlights of the season.

The 1st team under the captaincy of Danny Cash finished the season in 5th place in the Norfolk Cricket Alliance Premier League. Standout batsman for the season was without doubt Craig Estlea who finished the season with 778 league runs which put him highest run scorer in the division which included 3 x 100’s & 1 x 50. He scored a mammoth 181 against North Runcton off 124 balls which included 18 x 4’s & 10 x 6’s. Craig was involved a partnership of 238 in that innings with Matt Allin who had his best season for the club with 440 runs with the bat and 19 catches when he took over wicket keeping duties halfway through the season. New signing Josh Rowe was by far the best bowler with the ball finishing top wicket taker in the division with 38 league wickets including two 5 wicket hauls away to Norwich and at home against Diss. Other notable bowlers were the evergreen Phil King who finished with 17 wickets with 4/13 his best figures against the champions Downham Stow and Rob Fuller with 16 wickets including a Hat-Trick against Cromer.

The 2nd team finished the season under skipper Ben Tippett in 7th position in Division 2 of the Norfolk Cricket Alliance. The leading run scorer for the season was Jack Stevenson with 263 runs from 10 games with a top score of 83 away to Great Witchingham A. Jack did also spend 4 games in the 1st XI which stopped him adding to his tally in the 2nd XI. Jack was backed up from James Worby who finished on 240 runs from 9 games with a season best of 62 at home against Norwich A. James also spent games playing in the 1st XI stopping him adding to his tally. With the ball Danny Philpott was leading wicket taker for the season finishing on 13 wickets with 3/11 against Great Melton his best figures. Karl Gooderham had a decent season also with 11 wickets including 5/25 against league runners up Bradenham.

The 3rd team captained by Paul Feavearyear were playing in the Norfolk Cricket League Division 1 for the 1st time and finished the season in a very respectable 6th position.
Ryan Raven topped the runs chart for the season with a very respectable 258 runs from 9 games which included 2 half centuries, with a top score of 68 at home against Castle Acre. David Thorne also had a very good season with the bat scoring 240 runs from 8 games including 109 not out against Castle Acre away. Eddie Thorne was a consistent as ever and finished the season with 18 wickets to his name with 5/41 against Kirkley & Belton his best figures. Andy Emms finished with 11 wickets for the season with a best of 3/46 coming against Caister.

The 4th team under the leadership of Peter Barnes finished the season 2nd from bottom in Division 4SE of the Norfolk Cricket League. Gavin Barnes finished the season as 4th team leading run scorer with 113 runs including 2 x 50’s. Gavin top score came against Topcroft 3rd XI with 56. Nick Asker finished the season with an average of 105 from his 3 games with a top score of 49* against Old Buckenham 3rd XI. Tom Corroboy finished another season as 4th team leading wicket with 15 wickets to his name. 5/14 against Hethersett & Tas Valley was his season best which left him with a bowling average of 7.67 for the season. Youngster Will Cunningham in his 1st full season was very impressive and finished with 10 wickets. Rory Hannam in his 1 game for the 4th XI picked up 5/24 against New Buckenham.

Hope everyone enjoys a nice break over the winter and look forward to seeing you all again next season.