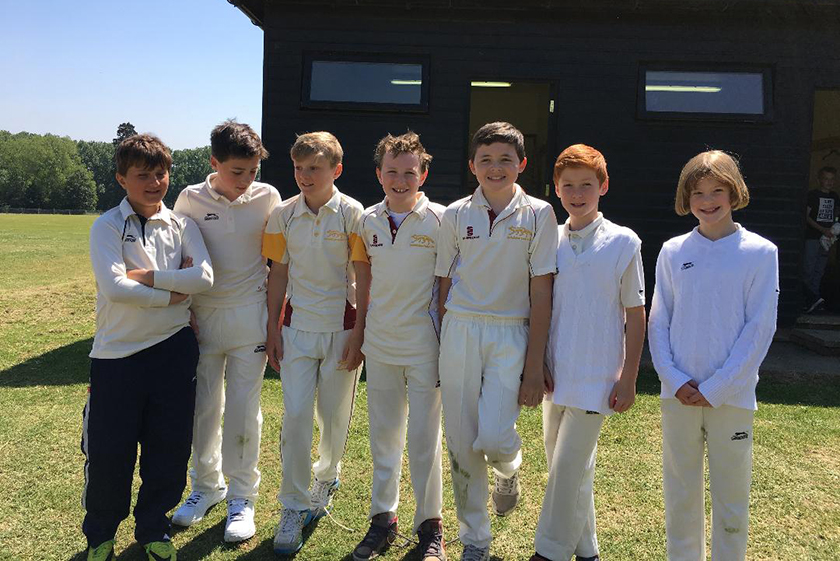 The U11s first home match of the season saw them pitted against Thetford. Garby won the toss and elected to field.

Jack and Adam opened the bowling to good effect with Adam getting a wicket in his first over.  They were then followed by of Libby & Sacha, Zach & Elliot and Robyn in her first match.  Despite good fielding and accurate bowling, giving away just 11 wides and 1 no ball in their 16 overs, we were unable to get any more wickets, and Thetford went on to score a total of 141 runs.

Oscar and Libby opened the batting for Garby. Unfortunately, a mix-up in the first over led to Libby being run-out and then both Elliot and Jack fell victim to some good Thetford bowling.  With Garby under pressure Zach came into bat, and for the remainder of the match both he and Oscar held firm and scored runs. However, they were not able to score at the required rate, and we finished the match with a total of 66 for 3. Top scorer was Zach with 17.

Despite the loss, the team should again be proud of their efforts and good teamwork. Steve nominated Oscar as the man of the match for his good wicket keeping and for batting for the whole of the Garby innings.

On Monday night the U11s had a difficult pairs match against an experienced Swardeston side.  After losing the toss Garby were put into field first.

Jack and Adam opened the bowling again but we had to wait for the fifth over for our first wicket from Freya’s bowling thanks to an excellent catch from Sacha. Further wickets came off Adam’s and Jonny’s with Ryan taking another excellent catch.  Despite good fielding and accurate bowling, Swardeston were able to set a formidable target of 351 runs.

Adam and Sacha opened the batting for Garby and were followed by Jonny and Ryan then Freya and Libby. Facing consistently fast and accurate bowling we were unable to score at the required rate despite only losing four wickets, and when Jack and Oscar came in as the final pair they were tasked with scoring over 120 runs. We completed the innings on a creditable total of 226.

This was another good effort against strong opposition and Ryan has been named man of the match for his excellent catch, together with good bowling and scoring a couple of runs with the bat.