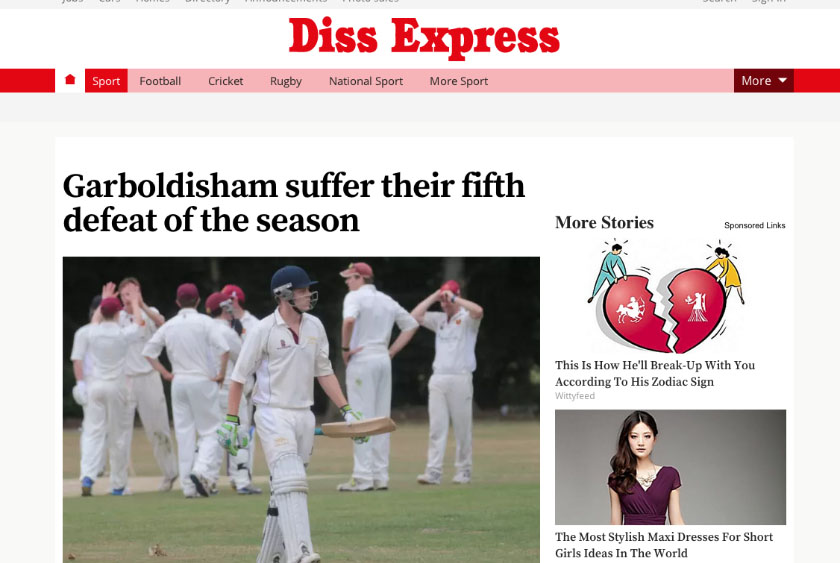 A high-scoring opening-wicket stand from Acle proved to be the difference as Garboldisham 1sts slumped to the their fifth defeat of the season on Saturday 24 June. Visiting skipper Joshua Rowe won the toss at The Langley and opted to bat first, which proved to be the correct decision. Openers Geoff Handley and Jaskaran Cheema made the Garboldisham bowling attack toil, putting on 172 runs for the first wicket. Handley (82) was first to fall to the bowling of Dan Constable, while Cheema lasted long enough to complete his century, before having his wicket snared by Rob Fuller for 117 — a knock that included 14 fours and two maximums. Fuller went on to be Garboldisham’s most destructive bowler, ending his nine overs with figures of 5-59. After removing the free-scoring Cheema, he also accounted for Rowe (1), Thomas Wilson (15), Craig Press (31) and Andrew Spaxman (11). Due to Fuller’s form, the Acle innings never found any major momentum after Cheema had headed for the pavilion, yet they were still able to post 272-8 from their permitted 50 overs. The home team’s reply started off in positive fashion as Constable and captain Danny Cash dispatched any loose balls to the boundary. The duo put on a 96-run partnership before Cash was removed by Shaun Roberts for a 34-ball knock of 37. Thereafter, plenty of Garboldisham batsmen made solid starts, but none were able to take those on to significant scores. Henry Phoenix (25), Alex Hogg (30), Jonny Wyatt (25), Jack Stevenson (20) and Pascal Walker (18) all got themselves set, only to then lose their wickets. Constable top scored with 63, but it was not enough to prevent Garboldisham from eventually falling 24 runs short in their pursuit of victory. The defeat has left Garboldisham fifth in the standings, with a gap of 32 points having now developed to Downham Town in fourth. Cash’s men are without a fixture this weekend, with their return to action scheduled for July 8 at home to Sprowston (1pm).

In Division Four,  Garboldisham II (174) recorded a 23-run victory away at Sheringham (151-9). Harry Youngson was the pick of the Garboldisham batsman courtesy of his 41 runs, which included seven fours. Defending 174 to win, it was over to Rory Olpin to star with the ball. From just seven overs, Olpin claimed four scalps at the expense of just seven runs.