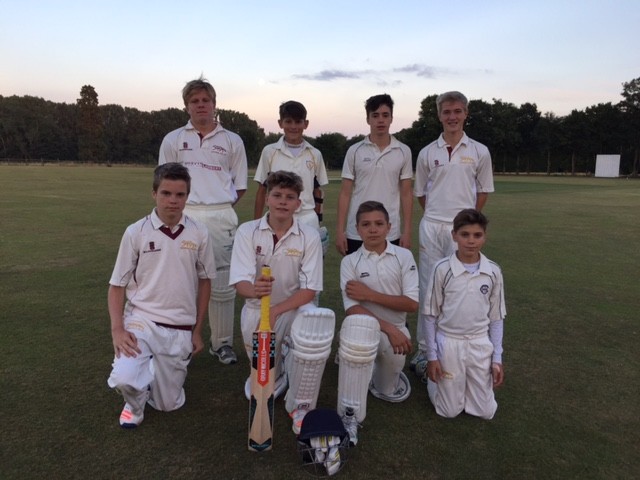 After a strong performance in the group stages, and a win in the last 8, Garboldisham u15 went into the semi final of the Norfolk Alliance unbeaten where they faced Dersingham on Tuesday 16 August.

Garboldisham won the toss and chose to put Dersingham into bat. Louis Hart and captain Toby Culling opened. Louis(1-12) bowled tidily and unsurprisingly made a breakthrough by bowling Chudley for 5. Toby (1-9) picked up a wicket of his own at the other end when Louis took a catch at mid-off. First change was George and Arthur (0-17) who bowled a tight line and built pressure. Garboldisham were in a good position and had Dersingham struggling at 31-2 after 7 overs. Nevertheless, Dersingham strung together a strong partnership and Cropley and Cotton both retired on 30. Garboldisham finished well and restricted their opponents to 99 for 3 after 16 when George Southgate ( 1-10 ) took an important wicket at the end. It was an excellent and tight bowling performance from Garboldisham.

Garboldisham went into bat needing little over a run a ball. Oli Campbell stormed to 30 and Toby played a steady innings to reach the same landmark later on. George Southgate batted well to reach 19 not out and Finlay hit a six to finish to reach 10 not out. A great performance from the lads winning with 4 overs to spare and it was good to have plenty of support on the sidelines.

Garby will be playing Horsford in the final which will be held next Thursday morning 25 August at 10am at Gt. Melton. Bring it on!!!