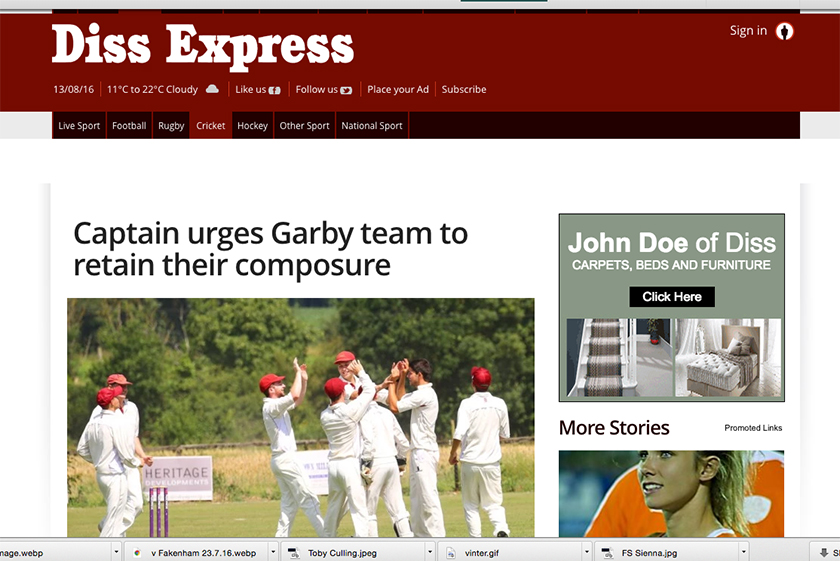 As the 2016 season begins to draw to a close, GCC 1st XI captain Danny Cash spoke to the Diss Express. Here’s the full extract:

Danny Cash has encouraged his Garboldisham players to not become bogged down by pressure during the final three weeks of their Dipple and Conway Norfolk Alliance Premier Division campaign. By the captain’s own admission, when the season got under way he and the rest of the squad would have settled for simply preserving their status within the division ahead of 2017. In contrast, ahead of Saturday’s derby clash away at Old Buckenham (1pm), eight wins this term has elevated Garboldisham up to second position, just 24 points adrift of leaders Brooke. One slip-up from the table-toppers would leave the door ajar for Garboldisham, but Cash is only concerned with his own team, rather than events elsewhere. “We just have to try to win our last three games and then see what happens,” he said. “It is just about us keeping doing what we are doing and making them win it. “There is no pressure on us because we did not expect to be in this position at all. “We can continue to play with freedom. Putting pressure on ourselves is pointless because we cannot control what Brooke do. “If they make a mistake and we capitalise then fantastic. But if not, I will still be over the moon with how the season has gone.” While Garboldisham have Brooke on their radar, a number of sides are in hot pursuit of Cash’s charges. One of those is fourth-placed Old Bucks, who find themselves just 20 points adrift of their upcoming visitors. Despite the fact that the close proximity between the clubs means that the two sets of players know each other well, Cash is not expecting any favours. “They are a very good side that are bound to be confident after getting a good win over Diss last time out,” he added. “When we played them at home the weather intervened, but it looked like it was going to be a close match. “They have some very good cricketers so we are well aware that it is not going to be an easy game.”