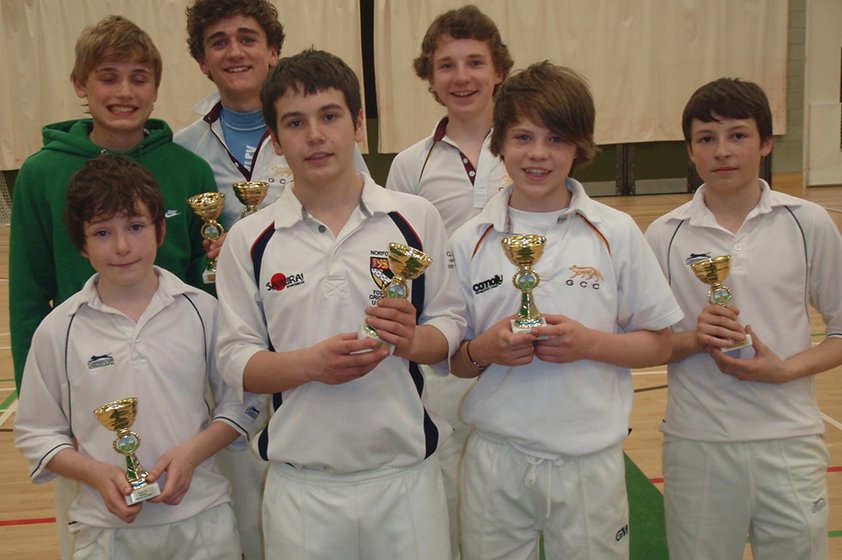 We’re short of a picture this week so here’s one of GCC u14s from 2009 who finished as runners up against Vauxhall Mallards in an indoor tournament at UEA featuring, back row: Joe Paul, Harry Youngson and Henry Phoenix and front row: Nathan Lamb, Ben Asker, Joe Seaman and… Matt Allin

Garboldisham had an exciting game last night (Sunday 15 November 2015) against Old Buckenham in the Breckland Indoor League but lost out by just 18 runs. GCC had won their first two games but they failed to make it three out of three against their old rivals who they’d defeated in last season’s final. Garby went into the game with two changes to their line-up – Matt Allin (back from Australia) and Chris Jones were drafted in to replace the injured duo of Paul Baker and Charlie Worby. Garboldisham captain Rob Fuller won the toss and elected to bowl first but a poor start with some wayward bowling and disappointing fielding, allowed Old Buck’ to set a net target of 242 for Garby to chase down.

Fevs and Sam Baker got GCC off to a good start and they were up on the run rate at the end of their four overs. Next pair in were Gavin Barnes and Matt Allin but the loss of three or four wickets (and therefore runs deducted) left the last Garby pair of Fuller and Jonesy with a little bit too much to do and Garboldisham pulled up short finishing with a net score of 225.