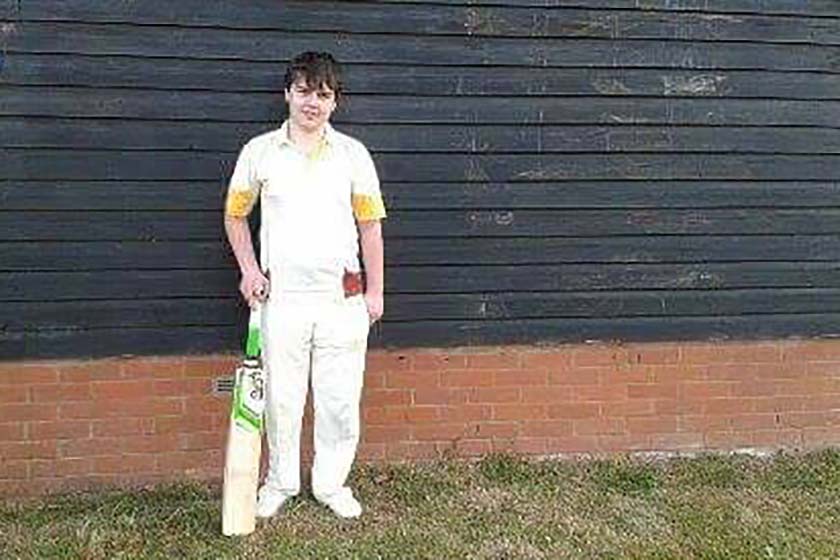 Lewis Taylor after Saturday’s win for the 3rds against Saxlingham. Lewi score 142 and notched up his first century for the club

The 1sts had a final few tense overs in their away game at Horsford but managed to scrape victory, grab the 23 points and move up to third in the league table. Horsford batted first and were restricted to 193 all out with Rob Fuller picking up 5 wickets – his second fifer of the season. With the bat, Kristian Williman had another superb knock for GCC, finishing on 96 and just 4 runs short of his century. After Kristian’s heroics, Garby survived a nervy batting collapse and with no wickets in hand the final two batsmen saw them over the line to win by one wicket.

The 2nds had the day off after their opponents Narborough pulled out of the league earlier in the season.

Like the 1sts, the 3rds had a heart-in-the-mouth game against visitors Saxlingham. Batting first, Garboldisham rattled off a heady 304 for 6 with wicket keeper Lewis Taylor scoring his maiden century and finishing on a fantastic 142 off 128 balls that included 25 fours. Fevs was 42 not out, Paul Baker 29 and Dick Culling 25. At tea, the 3rds were buoyed up and understandably feeling confident that Saxlingham would struggle to catch them but Saxlingham were soon finding the boundaries. After being hit for two consecutive sixes, Philip Carr made a breakthrough and bowled one of the Saxlingham danger men, but the visitors scorecard still merrily rattled along until Eddie Thorne slowed the run rate down with a couple of wickets from his spin bowling. Saxlingham were eventually all bowled out, with huge relief for the 3rds, for 288, just 17 runs short. Great entertainment.

The 4ths travelled down the road to New Buckenham who scored 214 for 8. Garby fell short in their chase as they batted in vain and they finished on 97 all out.