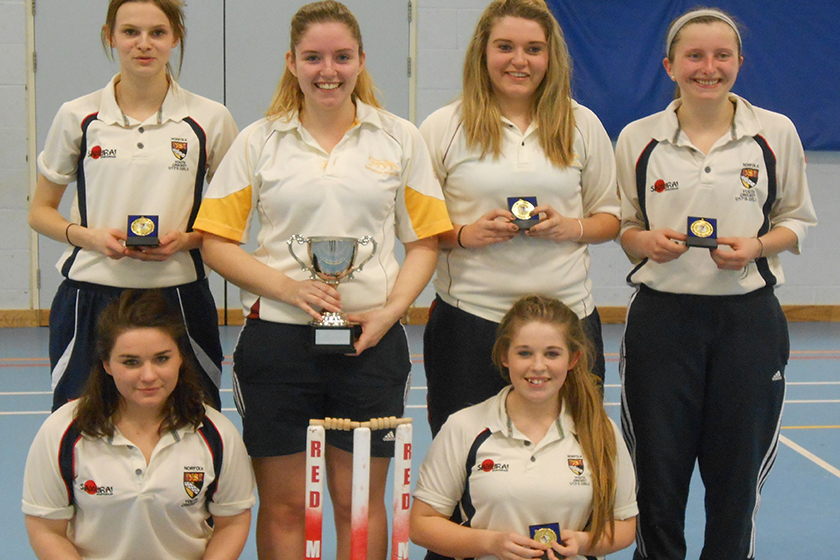 Here’s the match report from the tense and exciting Norfolk Cricket Board Women’s Indoor League Final which was played on Sunday March 29 between Garboldisham and Topcroft:

Having been put into bat by Topcroft, Garboldisham got off to a steady start with Jade Hoyte and Hanna Free batting well without the loss of a wicket in their 4 overs. Megan Hogg and Primrose Rushen were next into bat and played some good shots during their innings. Unfortunately the loss of a few wickets put the pressure on final pair Sarah McGahan and Lydia Raven who needed to bat well to get Garboldisham to a competitive score. With some sensible batting, no wickets lost and a lot of running, Garboldisham managed to reach 247-6 at the end of their innings, a net score of 217. This was the lowest score the team had reached in all their previous matches and the team knew they had to field and bowl really well to get a win. Topcroft got off to a flying start in their first 2 overs making a tense atmosphere at Taverham. However with some excellent bowling from all the team, wickets soon started to fall and Garboldisham took control of the game. Garboldisham managed to take 13 wickets, with some great catching, keeping and run outs, which reduced Topcroft’s score by 65 runs. Topcroft reached 236 -13, ending with a net score of 171. Garboldisham won the final by 46 runs. Well played to all the team, a great, lively performance and a deserved win! Thank you to Topcroft CC Women for a great final and to Kevin Denmark and the Norfolk Cricket Board for organising the competition.