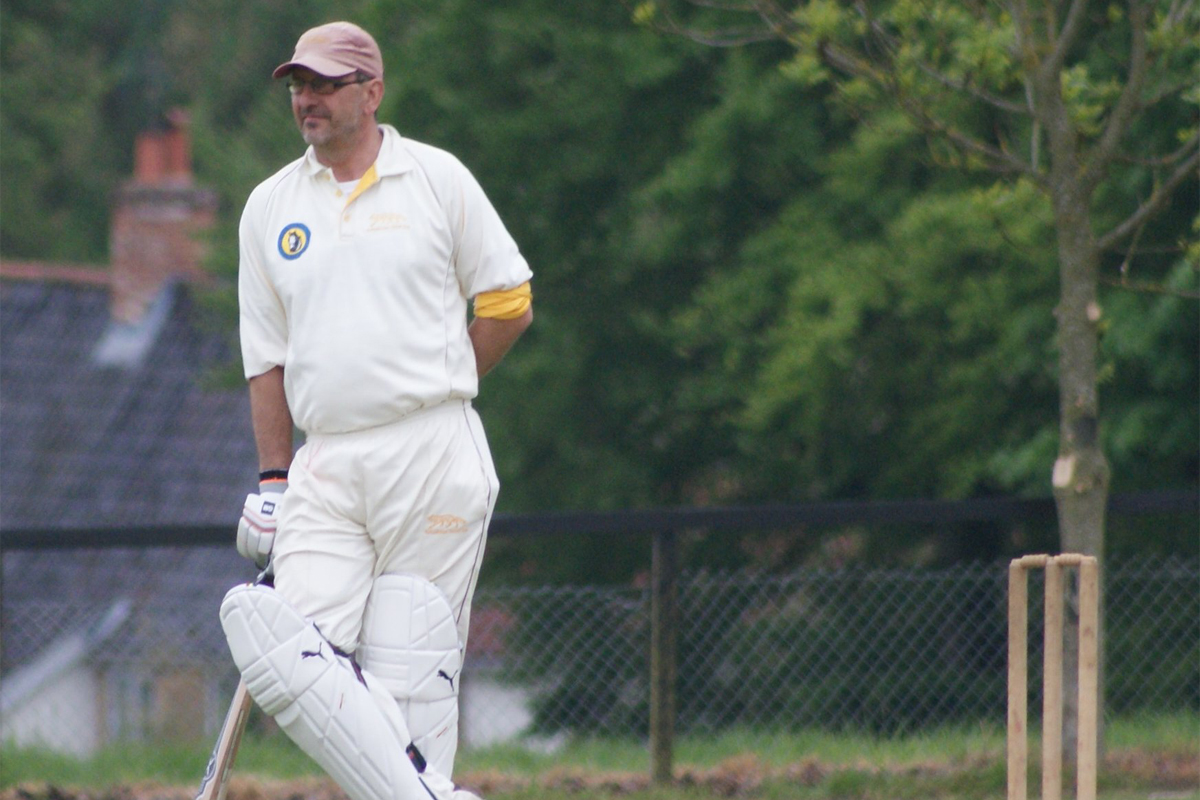 Ian’s funeral service took place in late December 2014. Woolpit church was packed to the rafters with over 500 people who had come to pay their respects to Ian who had been a huge part of Garboldisham CC for many, many years and a good friend to all, a fine cricketer and a real gentleman. Here is Robert’s moving tribute to Yogi from the service:

“My brief this afternoon is to talk to you about Ian the cricketer and it’s an honour to do so. For those of you who don’t know me I had the privilege of playing with Ian for 34 years at Garboldisham Cricket Club.

I first met Ian on a sunny Sunday afternoon in June 1981 in his native Suffolk. We were playing a friendly against Hadleigh and John Hogg had alerted us to a school mate who had opened the bowling at Culford and was looking for a game. Ian was duly invited to play and, in typical fashion, breezed in, bowled like the wind, took three wickets, had several beers afterwards and breezed out again. He’ll do we thought! The following weekend he joined us on the annual tour to Northampton and obviously enjoyed himself because, some 34 seasons later the rest, as they say, is history. It was soon pretty obvious that not only had we picked up an exceptional cricketer but also an exceptional person who was a pleasure to have in the team and to share a beer with after the game.

Now it might surprise some of you here today that Ian was initially an opening bowler as he was undoubtedly better known latterly for his exploits with a bat in his hand. But he was a very fine bowler with good pace, swung the ball around and, on his day, could be a real handful.  Evidence of this is the fact that in spite of not bowling for at least ten years, he is still the second highest first team league wicket taker in the club. He was a very proud father when Tom also turned into a very useful opening bowler and Joe as well has been known to get it down there at a fair pace!

Not surprisingly I’d like to talk more about his batting, which I could happily do all afternoon if the time allowed, as it has always been a real pleasure to watch, preferably, but not always from 22 yards! I could take you through any one of his many fine innings but there are two in particular I wish to recall as they were both defining moments for different reasons.

The first was in Norwich in 1983. We were playing against Eaton at Eaton Park and were invited to bat first on a pretty dodgy wicket in the cage.  After about twenty overs we were in trouble at 60 for four and our next batsman, our fearless captain Philip Southgate, was taking what is nowadays euphemistically called a comfort break. The fifth wicket duly fell and I looked about to see if there was any sign of Phillip but he was still busy elsewhere. When I looked round again Ian was already half way to the wicket looking back over his shoulder with a huge grin on his face as if to say this is the chance I’ve been waiting for and I intend to take it!

I could say that he then smashed it all around the ground but that would be an injustice.  He stroked the ball all around the ground in what was to become his trademark style and made it look ridiculously easy in light of our struggles beforehand. He scored 82 in very quick time, got us to a reasonable score and then turned around and helped bowl them out to ensure the victory. I don’t know where you are Phillip but I hope you’re aware what a huge service you did that day not just to our club but to Norfolk cricket as well. And I know you’ll forgive me for saying that Ian’s flowing cover drives were far more pleasing on the eye than your nurdled slip drives!

Needless to say Ian didn’t bat that low again, he scored his first hundred for the club the following Saturday and worked his way up through the middle order until he took his rightful place at number three.  In my book that’s where your best batsman bats, and Ian was undoubtedly our best.  In 1988 he won the batsman of the year award for the Norfolk League, our only player ever to have done so. Ian and I, from very early on, shared an ambition to take this little old South Norfolk village club from the depths of the Norfolk League up into the Norfolk Alliance.  If there had been automatic promotion in 1990 we would have achieved it then under Ian’s captaincy, but we finally made it in 1997 by being crowned champions of the Norfolk League and were duly promoted to the Norfolk Alliance. In 2003 he doubled up by winning the President’s batsman of the year award in the Alliance and the only other two players to have matched him in this were Carl Rogers and Shaun Arthurton, both very fine players for club and county.

The other defining innings I would like to talk about was at Fakenham in the Carter Cup in 2003. We batted first and Ian scored a memorable 140 out of about 260. I will never forget the ovation he received, not only from his team mates but also from the Fakenham boys when he reached his 100 and when he was finally out. I believe that was a defining moment because that’s when Ian finally realised he could have batted at whatever level he chose in Norfolk or Suffolk, something we had been telling him and he had been dismissing in typically modest style for some while.

What turned out to be his final innings was in the President’s match at the end of this season. Ian had played in all the previous 23 matches for the club side, and although not selected for that team, it didn’t seem right that he wouldn’t be on the pitch. When invited to play for the President’s team he jumped at the chance and strode out to open the batting with great purpose determined to prove a point and show that he could still produce it when it mattered. Our club bowlers gave it everything but he batted beautifully and was heading for a hundred before lunch until he top-edged one and was out for 71 out of 113 for 4.  What a fitting finale it would have been if he had managed those other 29 runs on the wicket where he loved to bat against the team he had graced for thirty four years.

I mentioned earlier that Ian captained the side in 1990. In all he captained the club for eight seasons in three spells when family and business commitments allowed. He was a natural captain. He read the game well, led by example, and was fair to both his players and the opposition. He wasn’t adverse to calling an opposing player back if he felt it was obvious that he had been given out wrongly. He himself always walked if he knew he had nicked it. Didn’t bother to look at the umpire, just tucked his bat under his arm and strolled off. He didn’t like the modern practice of sledging preferring instead to let his bat do the talking. In short, on the field he conducted himself like the true gentleman he undoubtedly was and I think it’s no coincidence that he was very popular with the panel umpires and would always share a beer with them after the game. For the same reasons he was very well respected and liked by members of the opposing teams and the number of you here today bear testament to that.

Ian was a huge presence on the pitch but equally so off it. He was an ever-present on the committee for the last 25 years. If things got a bit hairy he was always my sounding board, my voice of reason to try and resolve any problems and, more often than not, his solution was the right one. He did a lot of work which largely went unnoticed because if he had a couple of hours to spare he would go and hoover out the pavilion or sit on the roller or the gangmowers. You would always find him behind the bar at social functions and last March co-organised and did a brilliant job of compering our first ever Sportsman’s Dinner. He was a true all-rounder.

I’m sure many of you watched Michael Clarke’s moving tribute to Philip Hughes where he talked about the spirit of cricket. I think he got it bang on. It is this unique, indefinable, intangible bond that unites us, inspires us and drives us on to play this ridiculous game that we all adore. It will also provide us with our own memories of Ian that we will always hold dear. Some of mine are Ian with a bat in his hand, Ian with a beer in his hand, Ian with the hoover in his hand, Ian with a fag in his hand pacing relentlessly up and down when chasing down a target that got a bit too tight for comfort. Most recently in October, no-one will forget him compering the Presentation Evening awards and his hilariously energetic rendition of “My aunt Fanny went to America”. This unique bond cannot take away the pain we are all feeling at losing someone so very special, but maybe it can just take the edge off it, blunt it and make it a little easier to live with. For example, wouldn’t it help if we thought that Ian finished his innings in this world last Monday morning at eleven o’clock because he heard the bell ringing at ten to eleven to signify the start of play in the next place, wherever that may be. Wouldn’t it be good if when he gets there, wherever it is, our dear friend Jake is there in the nets waiting for him and greets him with “Come on Yogi we’ve got some unfinished business” and Chris Bunning is there, sitting on his favourite stool, not saying a lot but with a glass of something celestial in his right hand. And who knows, maybe even Philip Hughes might drop by and give them a few throw downs! Who knows???

What I do know though is this. Ian the cricketer, Ian the loyal and trusted friend, Ian the gentle man and true gentleman will be hugely missed by all of us whose lives he has touched and blessed over the past thirty years and he will never ever be forgotten.